The story of the visionary speculator and his precocious guide would later be revived in the enormously popular scholarly work of John Richardson, a friend of Picasso whose companion Douglas Cooper had amassed one of the largest private collections of Cubism in the world…In the first volume of his magisterial quartet, A Life of Picasso (1991), he borrows directly from Crespelle’s earlier account, citing the work of this predecessor while quoting Crespelle’s phrase “stupendous flair” in referring to Léon’s shrewd, uncanny ability. (Crespelle renders it as “se fiant a son flair.”)

Richardson regards Angély as “not so much a dealer as a denicheur: a talent scout or “spotter,” and adds…
Picasso was fascinated by Angély…Picasso may have drawn on memories of the sightless art lover and his child guide when he depicted a blind Minotaur being led around by a little girl. (Richardson 1991) 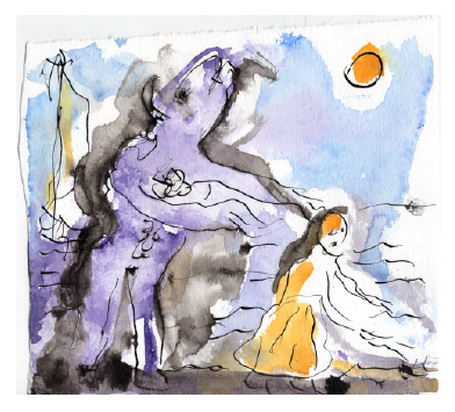 Sylvette David. Blind Minotaur Being Led by a Little Girl (III).
Devon, England. February 3-6, 2022. Watercolor and India ink
on Langton watercolor paper, 7 x 8 inches.
Although he died impoverished and nearly forgotten, and although the identity of his youthful guide is still enshrouded in mystery, le Père Angély helped to preserve what Richardson calls the “sacred stuff of art”—regardless of whether his motivation was merely pecuniary. Léon and Joséphine may also have inspired the greatest artist of the twentieth century.