THE BARD IN CALIFORNIA 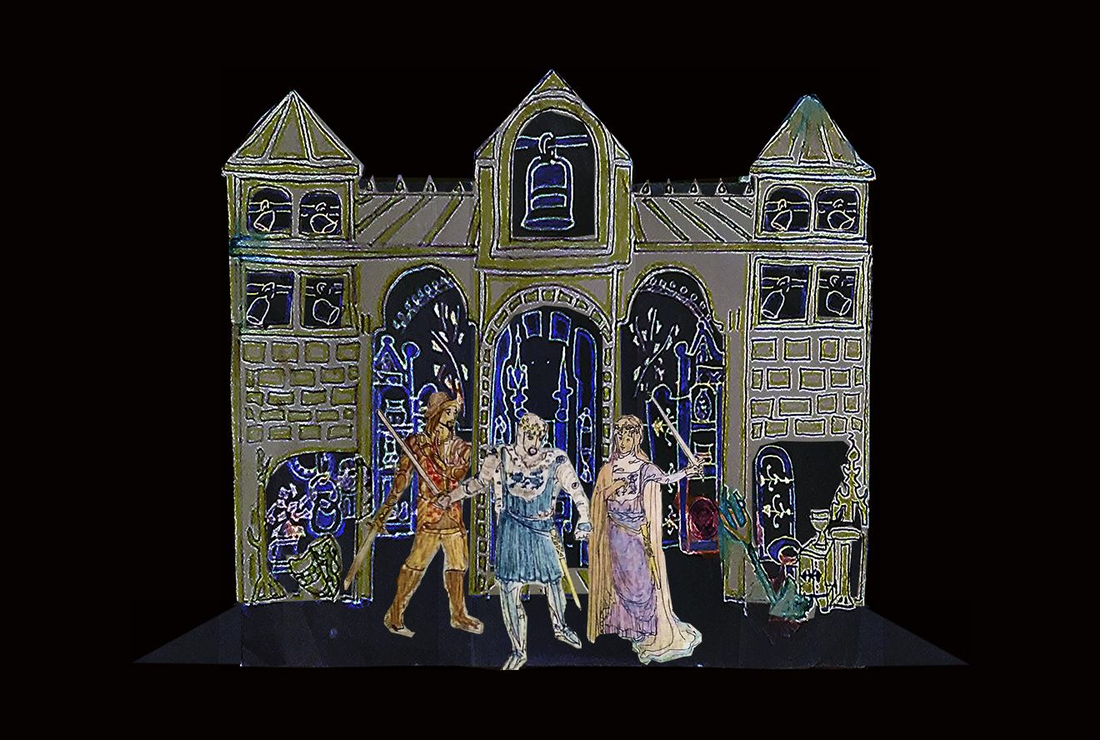 A couple of weeks after the March 2020 pandemic lockdown, The Berkely Zoom Shakespeare Company began a weekly Zoom reading of half a play by 15-20 people, only some of whom are experienced actors. In its 27-month life, we read through the complete canon of 39 plays once, and are well into a better organized, second reading of the canon. Perhaps as many as half of us have been here from the beginning, others have dropped out, but there are always more who want to join, and though most of us are in the Bay Area in California, friends in Oregon and Minnesota are also active. As you read this, we are a third of our way through the sequence of 11 history plays, and people’s enthusiasm doesn’t seem to be flagging.
When we began, my chamber music partner Mardi Sicular, who is not an actor, organized a Zoom reading of As You Like It that included her brother Robert, a professional actor and Shakespeare specialist, two other siblings, and classmates from a Berkeley High School production of the play that was revived to be part of the 1975 Berkeley Shakespeare Festival. I was peripheral to that show, and invited a few friends who were Festival veterans, along with some inexperienced people who simply love the play.

It was ragged, but the experience of reading aloud a living play during the dark early days of the pandemic, when we were all trapped with mortal fear in our cubicles, was like a shaft of sunlight promising new social and artistic interactions. Most of us wanted to continue, though we agreed that reading the whole play in one evening was too much. Not knowing how long things would continue, at first we simply went from one favorite play to another. This left us, when we decided to attempt a complete Shakespeare, with a number of plays we’d never seen or studied, even in graduate English lit programs.

Was there more toil?  (That's how The Tempest's Caliban put it, but in the present tense.) For our second time through the plays we chose to start with those set in Greece, followed by those in Rome.  We then used  Cymbeline (set in Roman Britain) to transition to the English plays with their sequence of eleven histories.  We leavened the historical sameness by inserting King Lear, Macbeth, As You Like It, and The Merry Wives of Windsor.  We conclude with plays set in Italy, ending with three masterworks, Othello, The Winter's Tale, and The Tempest.

Why Shakespeare, another dead white man, in our enlightened modern reality where gender- and race-blind casting looms large in the contemporary theatre world and elsewhere? The question answers itself with plays like Timon of Athens, which most American nonprofit theatres would avoid, given its searing indictment of the folly of charitable giving to people who will forget you as soon as your money is spent. Or Troilus and Cressida, an anti-war tract with a blistering parody of love, statecraft and antiquity: “Lechery, lechery, still wars and lechery: nothing else holds fashion.” Finding the urgency of #MeToo reflected in Measure for Measure, Pericles, Much Ado About Nothing, etc., or today’s political issues illuminated by the cynical manipulations of politicians in the history plays is a reminder of how human nature doesn’t change, and how Shakespeare is a master of depicting human nature.
In spite of its obvious limitations, Zoom Shakespeare turned out to be much superior to reading his words on a page. The effect of having different voices speak the lines brings characters to life and differentiates them from each other in ways that silent reading simply can’t. There was, and is, learning curve for some of our speakers, as they become familiar with characteristics of his language, but Shakespeare’s art is such that meanings are often clear to hearers even when the actor may not get them.

Zoom is, of course, a visual medium as well, creating opportunities with costume, makeup, props, some gestures and facial expressions. Hats have turned out to be useful, for instance, for visual characterization. A few musicians among us have become adept at necessary sound effects, such as trumpet flourishes when kings enter (generally played on recorder), crowd noises, battle alarums and drums, and especially at performing some of the lovely song lyrics. All of this adds to the fun of preparing and performing the plays for the most sympathetic possible audience—ourselves.

Mardi and I cast the next play before the second half of the current play and send out the new cast list on the morning after the second half. The temptation is to cast the most skilled people in the larger parts, but we’ve resisted that and tried to spread the work fairly equally. We also make sure people read a different part the second time we do a play. It’s a reading group, after all.  Some plays have as many as 50 speakers, so many people get multiple parts, and we’ve learned to send out a chart showing in which scenes each character appears. It was tedious the first time through to make sure people who were doubling didn’t have two characters in the same scene, but having done it once it’s been much easier the second time.

A problem, if it is one, has been the multiplicity of texts. Different editors have made different choices about various cruxes (printer’s errors where the transmitted text is garbled, or where it’s unclear who’s speaking a line), creating some confusion but also illustrating the editorial problems of the First Folio. This compounds a bigger problem, which is how to say the lines while looking at the camera. People who read from their college text or similar book often show only the top of their head while they’re talking. An acting teacher urging her students to “open up,” or face the audience, put it this way: “Without your eyes you have no face; without your face you have no character.”
A more successful technique some have adopted is to use two devices—one with the camera and microphone to connect with Zoom (a phone seems to work), and another like a laptop or tablet to scroll the text from one of the online complete Shakespeare’s, sites like the Folger Library or MIT. Careful positioning allows them to be seen and be expressive as they read. What would be ideal would be a teleprompter-like window on the computer screen just below the camera on which the script could be scrolled, allowing us to face the camera while speaking the lines while letting us see the others as they speak, but this technology, if it exists, has eluded us.

My first Shakespeare role was Dogberry in an undergraduate production of Much Ado About Nothing in 1959. It led to many years of involvement in Shakespeare production, as well as graduate study, that tapered off around the turn of the century. Until Zoom Shakespeare came along I had a kind of “been there, done that” feeling, if I thought about it at all. The revelations have been humbling. If you check your college text, for instance, you’ll probably count 37 plays. We now have 39, thanks to an Estonian linguist named Ants Oras, who developed a complex word  and phrase count system that added The Two Noble Kinsmen and Edward III to the canon. But the most powerful effect has been experiencing the sweep of the complete works, which led us to do it again.

We complete our second canon with The Tempest on May 8, 2023, and there is a decent chance we will begin our third the following week. If you wish to reach us, please email Peter Fisher at pcfisher@berkeley.edu