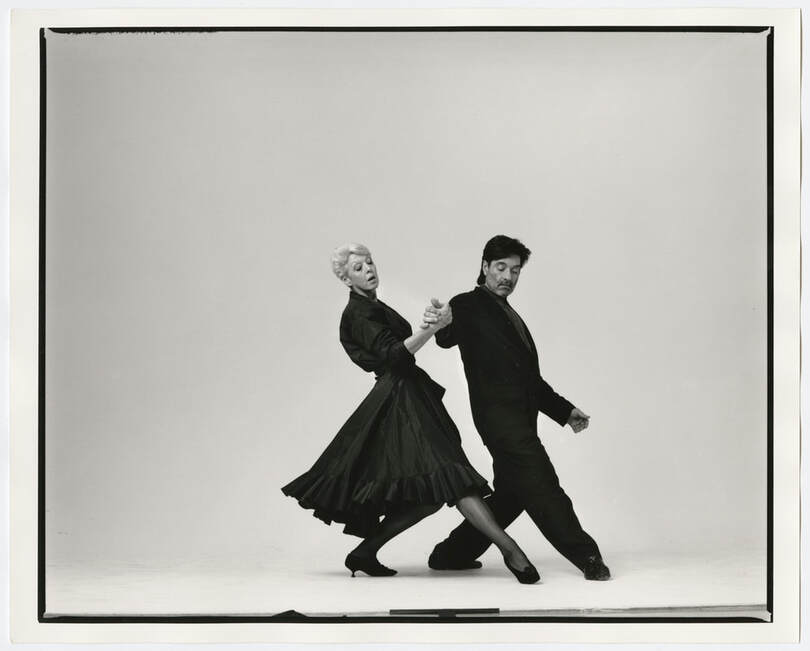 Since the late 1950s, David Gordon choreographed, wrote, and directed theater/dance pieces taken from tales of his astonishing life. I say astonishing because that’s the way he wrote about it, including the darkness and grief, as though every bit of his life was tantalizing—the world, not in a grain of sand, but in the tendrils of an argument with his wife. His translation of that astonishment into his work gave us the opportunity to see the wonder in our own lives.

On January 28, 2022, David and his muse, dancer Valda Setterfield celebrated their 61st wedding anniversary. The next morning, he died in his sleep, curled up next to Valda. So now obituaries and memories are popping up like David Gordon art pieces. Alastair Macaulay posted on his website a transcript of a three-hour interview he did with David. In The New York Times Gia Kourlis gave a brief history, stressing the importance to David of his dancers and family and their relationship to his work; Wendy Perron, writing in Dance Magazine, starts with “The brash, witty, contrary, lovable David Gordon passed away on January 29, 2022, at age 85.” As she summarizes his career she notes that he and Valda’s “legendary partnership lasted until his final days. . . .Jed Wheeler, the director of PEAK Performances, and Serious Fun before that, called them the Barrymores of postmodern dance, and the Fonteyn and Nureyev of performance.” 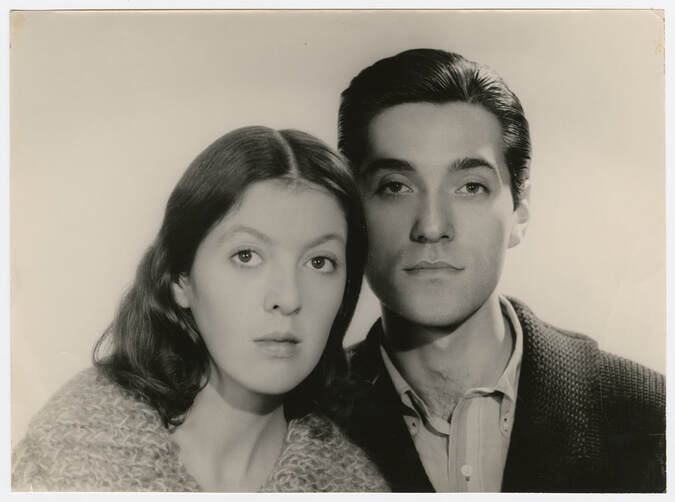 These published items and other social media outpourings offered remembrances from David’s life and observations about some of his dance works. Beginning from his early years with Grand Union, the seminal postmodern New York dance group, to his work with Baryshnikov, to his later works including Shlemiel the First, based on the play by Isaac Bashevis Singer with klezmer musicians playing their instruments as they are dragged across the stage on cloth, which he first produced in 1994, then again in 2010, and dances with not just wife Valda, but also grown son Ain Gordon, playing roles based on their family, he just kept on making new works even as he recycled older work, with great wit and bite, right up till his death.

This is my personal story of working with David, but you can always get the full story about his creative output, as David wrote his own history on his website, which he called Archiveography at davidgordon.nyc. With assistance from the Mellon Foundation and others, this website allowed him to consolidate the materials in his archive: videos, audio interviews, photographs, reviews, and writings. In looking over his own history, he began to write for the website what ultimately became his autobiography with photographs scattered throughout the words. The grant also provided funding to preserve his archive, which was then donated to the Jerome Robbins Dance Division, at The New York Public Library for the Performing Arts at Lincoln Center. As a former curator of the Dance Division, I’m proud to have been instrumental in acquiring this donation.


After I retired in 2015, I worked from 2016 to 2018 with David Gordon on these writings in Archiveography. This meant I was privileged to sit with David, three hours a day, two days a week, for two years and hear him ruminate about his various versions of family and dances and ideas. He already had an original style and distinct voice.

David Gordon ‘30s/40s ARCHIVEOGRAPHY - Part 1
He begins this paragraph with a witty description of his family and ends with a family mystery. The man knew how to write. So what was I supposed to do as “editor” for his Archiveography? How do you edit a master storyteller with a strong individual voice who has a work he titled Autobiography of a Liar?

We agreed about arranging the sections by decades, but went back and forth, arguing about his decision to write about himself in third person, about apostrophes, dashes, and numbers on paragraphs. My resolution to these endless disputes: you decide, but whatever you choose, you do it consistently. After that, most of my grammar changes involved adding italics to titles and hyphens to compound words. I didn’t touch the dashes -- that was David’s dance—the unused em-dash was my bailiwick.

On our first day together, I sat across from him at the table in his Broadway loft. He swiveled on his rolling chair between the computer on a desk behind him and me in front of him. At the end of the table Patsy Gay, archivist, associate producer, and all around assistant in every manner of file retrieval, sat with her laptop, ready to handle any of David’s computer issues. Alyce Dissette, producer of his archive project, his long-time manager, confidante, and co-conspirator, sat with us for the first hour, and Valda, wife, dancer, relationship foil, wafted in and out, offering bits of story. As David did with everyone, he began to talk. I didn’t have to try to concentrate for the three hours, I was enthralled. He reflected on the world; he asked questions of himself; and he described what he wanted to do for this project. He showed me a list of various computer files of writing, illustrated with photos and drawings, and said it was time to start putting them together. I went home with links to the unconnected bits. Reading them, I saw they needed only a little welding together to create a chronological framework. I found a few spots where he might substitute a word or add more info or slightly change an arrangement.

At our next meeting in his loft, sitting directly across from him at the table, only Patsy with us, I delicately gave him my suggestions. His eyes spit fire, his mouth spewed lava, and his wild bushy eyebrows pulled together as he ripped into me. David didn’t agree with anything I’d said. Of course, I shouldn’t have been surprised, this was a normal artist’s first reaction to criticism. Plus, I was getting to experience some of that vibrant argumentative life he had with Valda that I’d seen translated to the stage. In my barely five-foot frame, before this large powerful man, yet, I held my ground, and more importantly, I did what was needed, I listened. He told me the story again, as though my criticisms were the result of my not understanding the story, and he added detail, considered new ideas about it, took me on his journey in words. Then I left, wondering how I was going to do this. In a day or two, he sent me his revisions. My suggestions were rarely addressed directly in the rewrite, but after the discussion and thinking aloud, he had an improved section. And so, on to the next. For two years, we met, I suggested, he argued, he rewrote. What a great gift it was to be in his presence in this luxury of time. In this way, I became a part of his “art” family—after growing up surrounded by his “bio” family, he found himself involved first with a “theater” family.
I was afraid when we finished that I’d be left, never to have time with him again. I did see him at gatherings, but no more in this intense, intimate way. 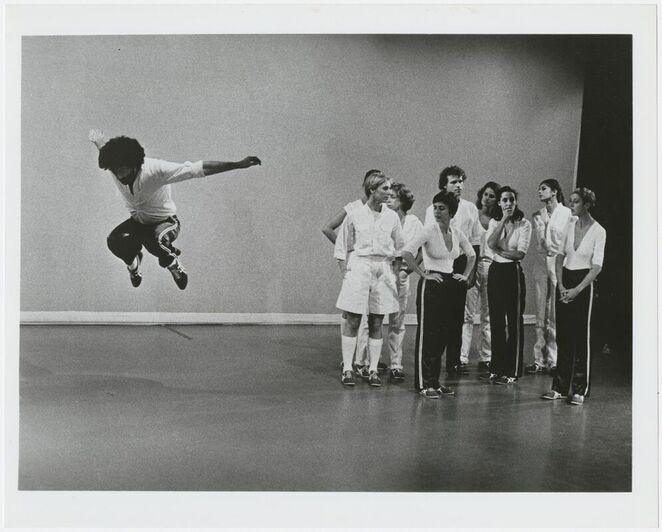 ​When he spoke about his dance performance collage pieces, I saw how, with words, gestures, and music, David translated the people and events to the stage, like a field study of his life. He even took arguments with Valda and turned them into art. 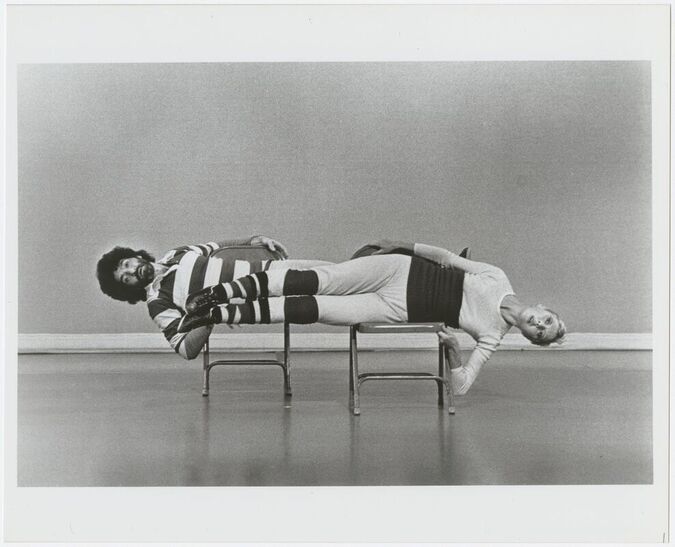 Working together in this close way, we’d often commiserate about our spouses, with whom we were still vastly enamored. Uncivil Wars, indeed. Valda, David’s wife and muse is tall, British, aristocratic looking. Arthur Rivers, my husband and muse, is tall, Harlem New York, aristocratic looking. One day I came in to hear this new complaint about Valda: she has no concept of putting like things with like things. She put a glass back in the cupboard next to the plates not the other glasses. I laughed said, my husband does the same thing. I open the cupboard to find he put a box of pasta on top of the plates. He has no sox drawer, each drawer has a jumble of sox, papers, and t-shirts.

Then David added that, growing up as he did in the Lower East Side in the center of extended Jewish family, he had no idea that the broader world didn’t live exactly as his family did. I told him, that, though I grew up in a small town in Wisconsin without relatives in a Catholic family—my folks did have six kids—I, too, thought the rest of the world lived as we did. David noted that Valda, because she went to boarding school, learned at an early age that there were many ways of living. I nodded in recognition, said Arthur too, though no boarding school for him, instead PS 46 gave him a wider view of the world. We also talked about his son Ain and my son Dave. But for these off-springs, all we did was crow and glow. 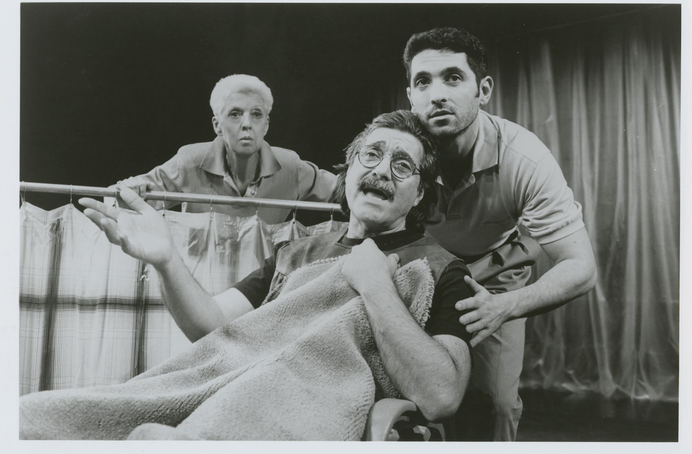 When we moved on to the later decades, David began to talk about death in a new way as though he was aware it was Beginning of the End of the . . .

David Gordon - 2010s ARCHIVEOGRAPHY - Part 2
From December 5, 2016 to April 6, 2017, The New York Public Library for the Performing Arts ran an exhibition of his work titled: David Gordon: Archiveography - Under Construction. Of course, his works were always “Under Construction.” For the exhibition I wrote a note that began with this paragraph:
I’m saddened that no more David Gordon possibilities exist, other than in memories and archives. And also in the life of Valda Setterfield and in the body of Ain Gordon—dancers carry movements in their bodies, but Ain carries actual DNA. It’s the Family Business.

​What a gift David has left us with.

On this website his writing about his life and work can be found by clicking on the decades at the top.
http://davidgordon.nyc/

Links from within DAVID GORDON website
Videos at The New York Public Library for the Performing Arts.
https://digitalcollections.nypl.org/collections/david-gordon-video-archive#/?tab=about&scroll=6

Press from the 1960’s to the present
http://davidgordon.nyc/script/people-talk-about-david