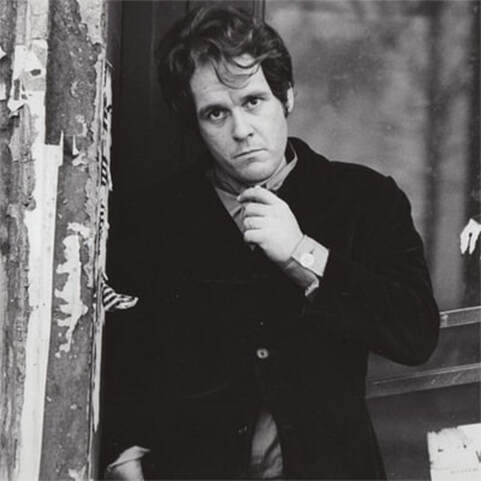 He could break your heart with his songs.

Then, if you looked at him the wrong way, he could break your nose.

While the crowd on Bleecker Street were following Dylan and setting their compass to the surrealists and the beats, Hardin was mining the blues of Ray Charles and Big Bill Broonzy, and he wrote with the poetry of fear and suspicion and resentment :

You upset the grace of living
When you lie

He was so short that he had to stand on a chair to reach his heart.

His hurt and his rage and his fear of loss made him lash out at anyone who got too close, at anyone who didn’t get close enough. A look at the back of the first Lovin’ Spoonful album tells the story — there, just in back of the band, scribbled on the wall behind The Bitter End: TIM HARDIN IS A BAD BOY, written by a waitress who crossed a line that wasn’t visible.

But what he did with that hurt and that rage was breathtaking.

Leonard Cohen kept his albums with him on the island of Hydra, Patti Smith had his records on MacDougal Street. He was a secret all over the block until the neighborhood changed.

“I’ve always stood out”, he once told me. “Always.”
I thought he meant his size.
“Did that bother you?” I asked.
“Why the fuck would it bother me?” he snarled.
He could turn ugly fast.
“Why wouldn’t I want to be noticed?”

He was often in a fog. He’d forget where he was, but he never forgot WHO he was.

Years later, there was a memorial for Phil Ochs at The Bitter End. Ochs had hanged himself in his room a few days before with a few coins in his pocket and a few scraps of songs that he would never finish. There was a house band…Harvey Brooks might have been on bass, John Sebastian on harmonica, Howie Wyeth on drums. Tim Hardin borrowed someone’s Martin and taped the lyrics of “Pleasures of the Harbor” to a music stand. He changed the melody, but he sang it so passionately, so soulfully that it didn’t matter. He turned it into something Ray Charles might’ve sung.

And he paused, like he could see the ships there in front of him, seabirds flying in the wind, the sky everywhere.

Come and take the pleasures of the har-bor.

He made it his own, and the words were so clear and so strong, you could imagine that that’s the way Phil Ochs had always heard it, in the voice Phil Ochs had probably always wanted, broken & battered by time and drink and loss, but still standing out above anything around it, like a ragged flag in the breeze.

You may not remember the words. Even Phil Ochs needed a cheat sheet…there are a fuck of a lot of words, maybe more words in that one song than in all the songs on Tim Hardin 1 & 2 put together. Granted, Hardin’s songs were like haikus, a single phrase, a single image that he’d hold up to the light and turn slightly, first this way, then that, just to see how they would shine.

Phil Ochs was more of a journalist, maybe more of a screenwriter. He had to set the whole scene, camera angles included.

Oh, soon your sailing will be over
Come and take the pleasures of the harbor


Hardin didn’t sing all the verses, but that doesn’t mean he shortened the song. He stretched the words to fill all the emotional spaces hanging in the air, the sense of loss that hovered everywhere.

He didn’t bother setting the scenes that Phil Ochs had painted, word upon word, but he kept our eyes fixed upon the harbor, the sound of that word, har-bor, pulling it like toffee or like a lost cloud, till you could sense the mizzen and the mainsail there in the distance, the shadow of the mast falling over the deck and falling over the what-do-you-call-them, pleasures, the pleasures, the buried treasure of pirate gold and maritime morphine, the sins of land and homecoming, the temptations of the flesh and the temptations of the spirit, the pleasures of the harbor, the girls and the whiskey and the needle and the far horizon, and when he sang, the sea was all around us, the sea was calm and the pleasures were laid out at our feet, the pleasure of time and of no-time, what happens when time stops but the sea goes on, what happens when the sea is awash with roses, misty roses, and soon, he sang, soon, your sailing will be over.

It was in the middle of a phrase:

Soon, your sailing will…..

He left the song there waiting. And then he handed the guitar to someone or other and knocked over the music stand, stumbled off the stage and lit a cigarette. Paul Colby, the proud owner of The Bitter End, and even prouder owner of the greatest waxed mustache in all of the village, walked over and put his arm around Hardin’s shoulder and nodded affectionately.

“Beautiful.” he said. “Beautiful. So sad about Phil.”
“Why?” Tim Hardin looked startled. “Did something happen?”

At that moment, the harbor was all.

Editor's Note:  The following is a taste of a Hardin performance:

RETURN TO TABLE OF CONTENTS