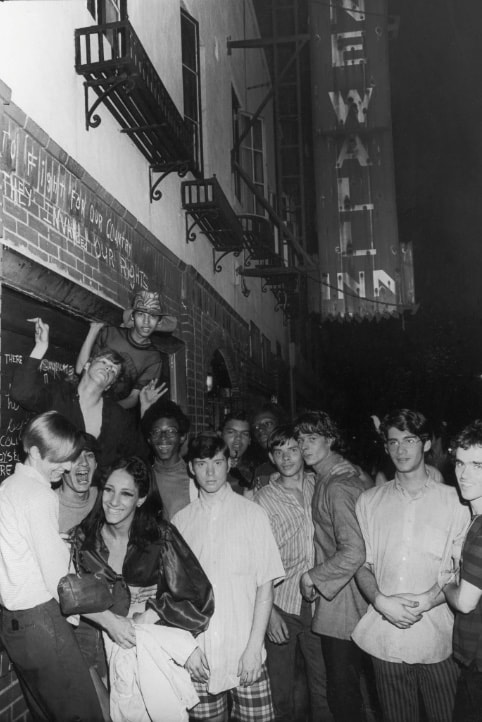 Just over fifty years ago, in the early hours of June 28, 1969, your correspondent and four other Heavy Revolutionaries were tripping our brains out in a souterrain apartment commune on the corner of West 10th Street and Waverly Place, diagonally across from where Three Lives books is now.

The trip being well advanced, my comrades, first one, then all, proclaimed themselves “munchy,” but wanted something cool and sweet, like ice cream, but not. The desire came upon me too, so I self-delegated to venture into out into the world, my mission being to score a tub of Whip n’ Chill from the Smiler’s on Sheridan Square, which we called Frowner’s. Thus did your correspondent, then only one month into his nineteenth orbit around the sun, bound up the steps to street level and into the embrace of the Stonewall Riot.

To my right, down 10th Street, a burning trash can, roaring shouts from the crowd on Christopher and the sound of breaking glass. To my left the sight of several men in dresses overturning a police car – abandoned but with cherry top still flashing – even as a squad of mounted TPF attempted to bludgeon their way through the mob.

I realized I was tripping, and also that the world was tripping. “When did you ever see a fag fight back?” a participant later asked. “Now times were a-changin’. Predominantly the theme was ‘this bullshit has got to stop.’”

In the instant, I rushed back inside to inform my comrades that the most impossible and marvelous hallucination was occurring outside in the form of a gay riot – though none of us nominal straights used the word gay back then.

Well, that’s pretty much the gist of it. My cadre helped itself to some fun street fighting, deglazed the Manny Hanny on Sixth and Waverly, and pulled some sisters and brothers back from the wrong arms of the law. None of us got busted.

For days after the next night of rioting, the Village lay wide open. Liberated. And amidst the myriad of bigger, wider consequences of that uprising and the movement that followed, one small change in the universe persists: your correspondent has never been able to think “straight” again.

​​RETURN TO TABLE OF CONTENTS