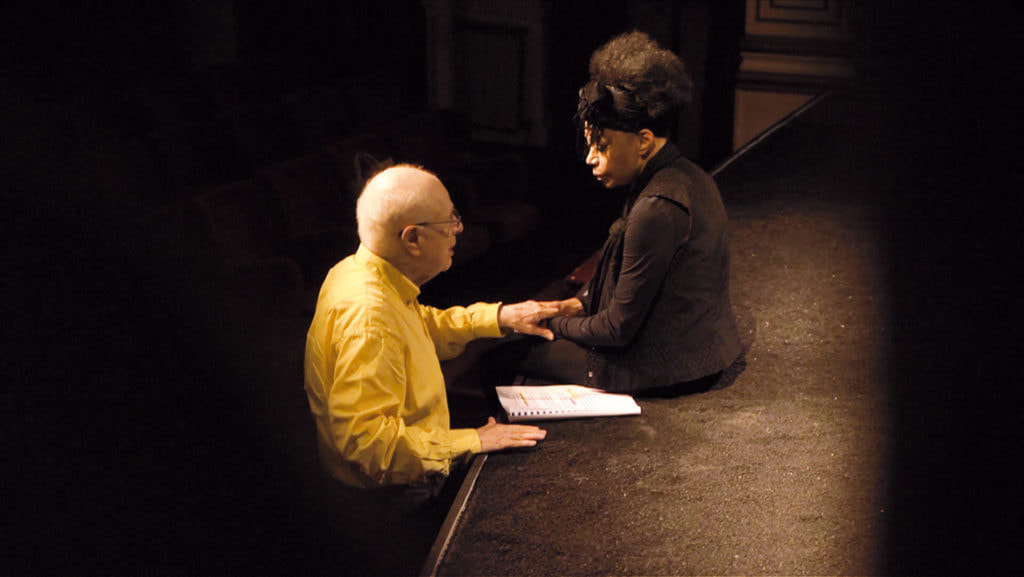 Peter Brook with Miriam Goldschmidt
rehearsing for "Die Verwaiser" ("The Orphan"), Naples 2013
Photo credit: J.D.Sagt under Creative Commons license
For more than 60 years, Peter Brook was theater’s Hermes—its peripatetic messenger, its herald of change. Brook thought, literally, outside the box. He moved theater from the static box of the auditorium into any space of human experience. He staged a Sanskrit epic, the Mahabharata, in a Provençal quarry. He led a troupe to perform his dramatic adaptation of  Farid ud-Din Attar’s poem,“ A Conference of the Birds,” in villages, schools, and outposts across sub-Saharan Africa. But Brook also took theater out of  its figurative box of mummified tropes and ossified traditions—what Brook called “the deadly theater.”  In Brook’s hands, a conventional stage became a laboratory; Shakespeare and Sophocles, the avant garde. His passing leaves an eternal void in the world of art.

Brook’s influential book, The Empty Space (1968), was the very first book of art theory I ever read. I was junior in high school and I had started a little theater group with my friends. I happened upon the book at our town’s library—I lived in New England, after all, and the town library was a feast of unusual volumes. I checked it out, read it, and bought a copy—one of the first books I ever brought with my own money. I found myself navigating to other books by artists who influenced Brook, like Antonin Artaud (1896–1948), whose “Theater of Cruelty” assaulted the senses ,and Jerzy Grotowski (1933–1999), whose “poor theater” stripped away all but actors in creative synchrony with the audience. Then, as luck would have it, the library had a Friday night showing of the film version of Brook’s Marat/Sade, so I had the chance to see what Brook was writing about.

I used The Empty Space as a guide for my contributions to our theater group’s productions. In it, Brook presents the ideas that, with no exaggeration, revolutionized the theater. He defined four kinds of theater: the deadly (conventional and stiff), the holy (sacramental, but risking sentimentality), rough (popular and unrefined) and Brook’s own immediate theater. Brook’s immediate theater was spare and bold—no ornament to detract from the actors effort to be completely present and convey meaning in every word and gesture. In many ways, the theater we take for granted today is Brook’s legacy: productions without historical costuming, minimalist sets, and mood of intimacy, and astounding reinterpretations of text. Brook shared this legacy through his important posts as director of productions at London’s Royal Opera (1947–1950), at the helm of the Royal Shakespeare Company (1962–1971) and by founding, in Paris, the International Center for Theatre Research. Through it all, Brook remade theater, for both troupe and audience, as a dialectical process of experimentation, contemplation, and renewal.

Before discovering Brook, I believed that art emerged accidentally and thoughtlessly. I had no idea that artists could analyze what they did. Brook showed me that a playwright or director could have a dramatics that is original, rational, and, above all, intentional. But Brook’s vision was so wide, I sensed that theater alone could not contain it: poets can have a poetics; musicians, a musicology, painters, a theory of art. I embraced what was, for me, the revolutionary idea that reflection on art could be an essential to making art. Brook seemed to welcome a broader view writing in The Empty Space that any artist needs an intentional “school” that engages in the analysis and refinement theory as well as the practice of skills:

In a word, alive. That’s word that floats to my consciousness whenever I think of Peter Brook. Alive: pulling The Empty Space out of my bike basket, and sitting down by the mill pond to devour it, hungry to be an artist. Alive: mesmerized by the living, pulsing energy of Marat/Sade at the library’s film series. Alive: returning to my art, and The Empty Space, after years in the deadly theater of conventional adulthood. For Brook, art had to be alive. His theater breathed and bled and bore pain. It’s almost incomprehensible that he has died.
Notes
“Now cracks a noble heart. Good-night, sweet prince,/And flights of angels sing thee to thy rest!” Horatio; Hamlet, Act 5, Scene 2.

The American Shakespeare Theater was active 1955 to 1982, abandoned, and then in 2019, was set ablaze by an arsonist and burned to the ground.