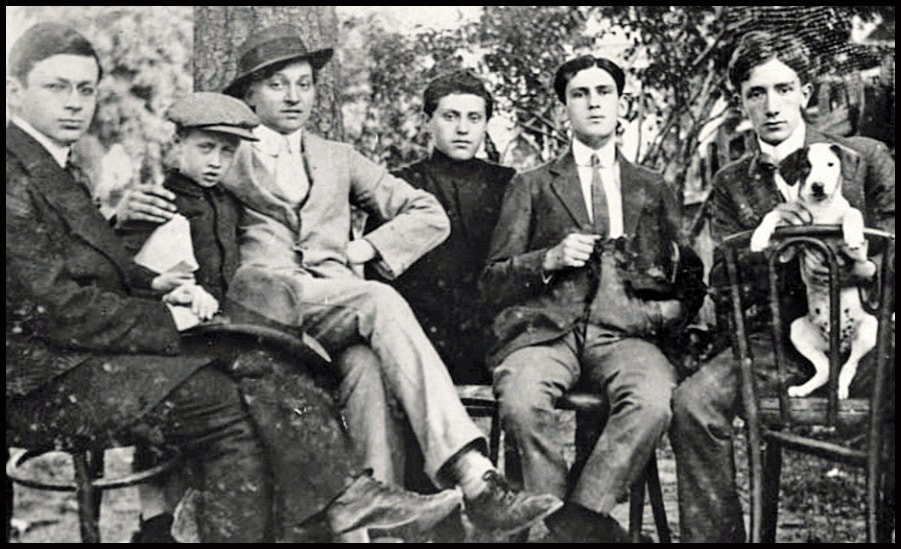 Dadaists Tristan Tzara (far left) and Marcel Janco (third from left), whose work is at the root
of found poetry. Taken in Romania, 1912. Photo in public domain.

New Verse With a Debt to Dada

Found poetry is having a moment. Blackout poems, created from prose by blacking out text to reveal verse, are everywhere online and in print. Other forms of found poetry—computer-generated poems, erasure poems, and cut-out poems—have been embraced by writers, readers and literary critics. The New York Times even publishes its own online poetry generator, to create blackout poems from selected news stories.

Two visual artists, Austin Kleon (USA) and Tom Phillips (UK), have been instrumental in contributing to the current vogue for found poetry. Kleon’s bestselling 2010 book, Newspaper Blackout, along with his blog, are credited with the popularization of blackout and other forms of found poetry. Phillips painted, cut, and collaged the pages of a Victorian novel to create A Humument. The Tate galleries house editions of this book in its permanent collections. (Work by Phillips, along with that of other creators of found poetry, is included in this anthology.)

Found poetry may seem entirely new, a product of an age where cutting, pasting, blackening, and colorizing are easy thanks to digital technology. But this poetry has tenacious historical roots in Dada—the irreverent arts movement that exploded during World War I—particularly the work of Romanian-French Dadaists Tristan Tzara and Marcel Janco. Social conditions, then and now, proved to be fertile ground for art, like found poetry, that democratizes the creative process and rejects the artistic conventions of the dominant culture.

Found poems were a definitional part of Dada, as were other forms of found art, such as Marcel Duchamp’s urinal displayed with the title, “Fountain.” Dada began in about 1915, a movement dedicated to killing the conventional and systematic in culture, the culture which has brought the world to the absurdity of the Great War. Literature was one of its targets. In the the words of German Dadaist Hugo Ball (1886-1927), “a line of poetry is a chance to get rid of all the filth that clings to this accursed language.” By the early 1920s, Dadaism had been been subsumed by Surrealism, but not before the artists of the Dada had influenced many better known surrealists of the early and middle 20th century.

Dadaistic found poetry is most closely associated with two of Dada’s pioneers: the writer Tristan Tzara (1896-1963) and the visual artist Marcel Janco (1896-1984). From 1914 to 1915, Janco and then Tzara emigrated from Romania to Zurich. In this Swiss city, Dada was born, when Tzara, Janco, Ball and other artists founded the Cabaret Voltaire. In 1919, Tzara and Janco departed for Paris, where they continued their work. 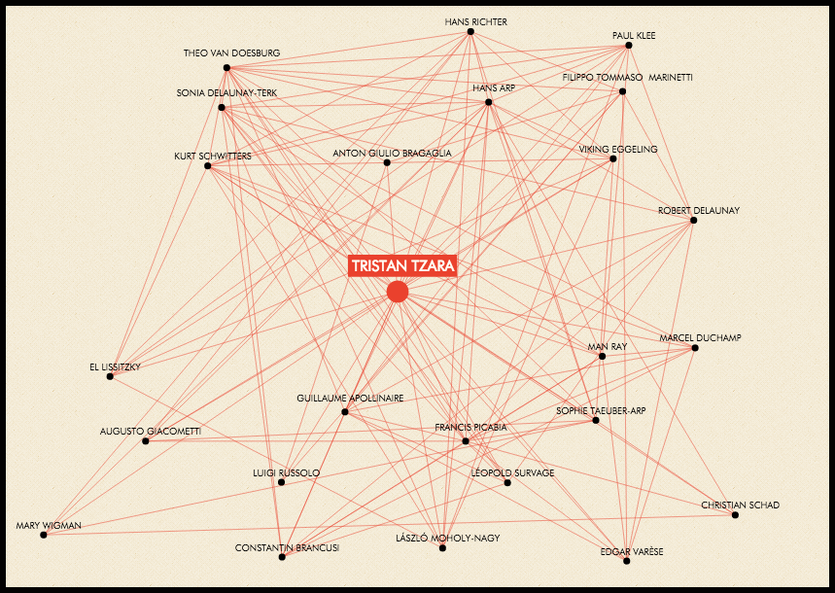 Influence of Tristan Tzara on Dadaists (like Marcel Duchamp) and Surrealists (like Man Ray and Guillame
Apollinaire). Reprinted with permission of the Museum of Modern Art, New York.
In 1920, Tzara famously created flippant instructions for finding poetry in cut up newspapers, “How to Make a Dadaist Poem”:
Tzara wrote that all Dada share an “absolute and unquestionable faith in every god that is the immediate product of spontaneity,” which certainly applies to his cut up method. Although it is unknown how often Tzara used this found poetry technique to craft his own poems, there is no doubt that he mimicked the spontaneous, odd expressions generated cutting up newspaper. Tzara’s stanzaic verse is a cornucopia of strange imagery and language, as in this example from the poem, “Vegetal Swallow” :

“Foundness” is also on display in Tzara’s typography poems, which mimic cutouts of multiple texts in different fonts and sizes. One of these is, “Bilan” (“Balance Sheet”), included in this anthology, along with an homage by the Surrealist André Breton.

Tzara’s poetry intersects with the visual art of fellow Romanian Dadaist, Marcel Janco, in its qualities of wild juxtaposition and use of found elements in collage. Notable examples are Janco’s cobbled “mask” of Tzara (1919), and his many influential, experimental collages, especially “Collage au dé Dada,” (1918) which contains fragments of book pages. Janco shared the view that spontaneity and chance were definitional to Dada’s  “belief in a direct, magical, organic and creative art.”

Dada’s influence on later movements in art has been profound, but underestimated. As Romanian writer Andrei Codrescu noted in his deconstructed biography of Tzara, "Surrealists, Abstract Expressionists, Beat writers, concrete poets, and New-York School poets, are among the movements inspired by Dada." Notable examples are the “cut up method” of later beat poets William Burroughs and Brion Gysin. This method involved a tidy cutting and realigning columns of newspaper text, and enabled Burroughs to generate some strange and lyrical poetry, such as his poems on viruses, microbes, and cancers from cutups of newspapers articles on science; and it is interesting that Tzara, too, found infectious organisms thematically intriguing. In his 1924 lecture on Dada, Tzara used microbes as a metaphor for the anticonventional urges of Dada: “Dada is a virgin microbe that penetrates with the insistence of air into all the spaces that reason has not been able to fill with words or conventions.”

Why the current fascination with Dadaistic found poetry?  One reason may be the sheer democracy of found poetry, which derives from its Dadaistic rejection of convention. Found poetry is open to all people, not just trained writers steeped in literary conventions. It attracts people already accustomed to crafting on our wildly democratic, self-promulgated digital media, such as YouTube, Twitter, Instagram, and blogs. Often, these creators do not make found poems as art per se, but as tools for psychosocial healing, as in John Carroll’s Instagram community of blackout poets.

On the other hand, found poetry does not exclude the schooled poet. Rather, it dovetails with the current style of lyrical randomness and unexpected juxtaposition of images, which is seen in the work of many contemporary poets, with Sumita Chakraborty a notable example. Randomness in writing poetry, like reordering lines or stanzas arbitrarily to see what emerges, is not cheating. Rather, it is the demystifying of a process that always happens anyway. As Burroughs wrote, “All writing is in fact cut ups. A collage of words read, heard, overheard. What else? Use of scissors renders the process explicit and subject to extension and variation.”

Tzara said that disgust drove Dada. The Dadaists loathed the ossified art forms that buttressed imperial culture—the culture that produced the barbarism of the Great War. They were repulsed, as Tzara wrote, by the “mercantile art” that props up every politician, philosopher, and priest of empire.Disgust was central to Dada, and it is central to the lives of artists today. Like the Dadaists, artists are sick to their cores of the same old colonialism, racism, and systematized violence that is still. It’s no wonder that, like Tzara, poets today say “enough” to convention, grab their markers, and reclaim found poetry for a new generation.
- Dana Delibovi
Go To Poems