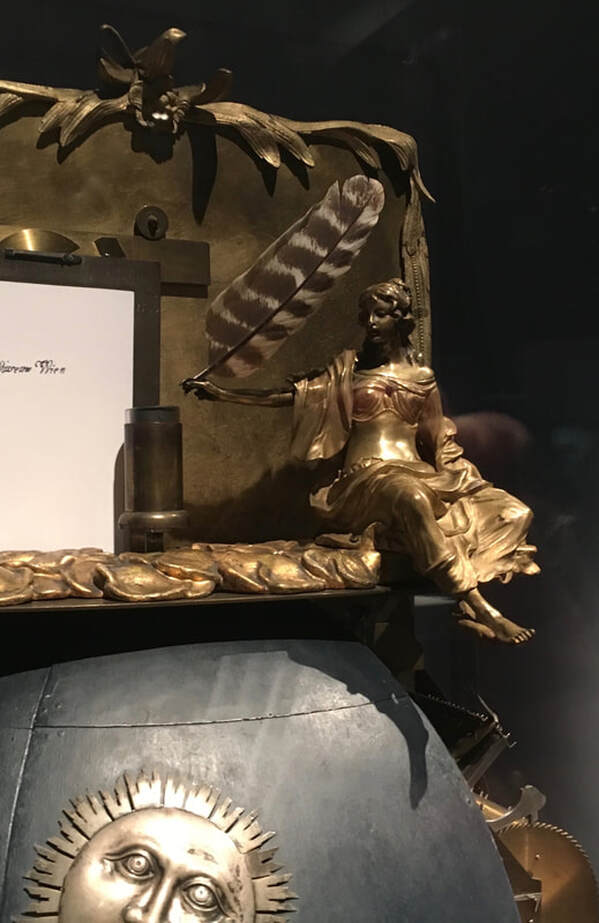 AutoMiraculous Writing
By Eric Darton
The Miraculous Writing Machine, hereinafter referred to as AutoMiraculous, is one of several extraordinary works in a mind-blowing exhibition, Making Marvels: Science & Splendor at the Courts of Europe, on view at the Metropolitan Museum of Art until March 1, 2020.

Built by Friedrich von Knaus (1724–1789) in his official capacity as machinist to the Viennese court, AutoMiraculous was presented to Empress Maria Theresa in 1760 in commemoration of a court-sponsored “Century of Writing.”
AutoMiraculous is made of iron, brass, bronze, paper, wood (with marbleized stucco, and gilding) and wields a feather quill pen dipped periodically into an inkwell at the figure’s right. Currently, AutoMiraculous lives and works at the Technisches Museum, Vienna.

The final masterwork in a series of increasingly complicated automata designed by von Knaus – think Hoffmann’s Uncle Drosselmeyer – AutoMiraculous writes via a mechanism housed within the sphere that regulates its hand movements. More than a hundred words can be programmed via the arrangement of pegs on a rotating barrel, as in a music box. AutoMiraculous can also be set via a hand-worked control to appear to take dictation. And all this without an MFA!

As to the iconographic use of a solar sphere decorated with alchemical symbols and crowned by a comely female form – the Genius of Writing? – well, what can one say?

To view the Met’s clip of AutoMiraculous in action:
https://www.youtube.com/watch?v=xLUoDSNDj4U
RETURN TO TABLE OF CONTENTS